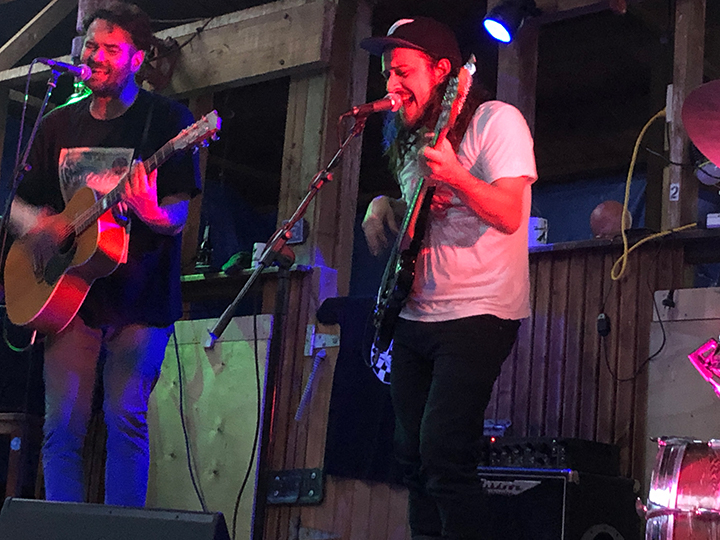 The New Year’s Revitalize festival in Southwest Southland was hit by the same weather bomb that ravaged much of the country that week.

However, a large disused wool shed saved the festival from disaster, and the general feeling was upbeat and relaxed, if not completely revitalized.

It will go ahead on a revised date in 2022, with a similar format, but with improvements to enable more activities to go ahead in the case of rain.

Although it rained for much of the weekend, worse hit was the road from Queenstown, which washed out, meaning artists who had not already arrived in the district were unable to attend, along with some groups of festival goers. Ticket sales were down 25% on expected numbers.

Unlike, other unfortunate festivals around the country at that time though, Revitalize had a Plan B.

“It’s usually hot and sunny at that time of year, although, our district does border Fiordland, so it can rain on any given day in the year,” says Revitalize organiser Tim Gow, who holds the annual festival on his Mangapiri Downs OrganicStud farm.

The farm has a largely disused woolshed, given that the Gows breed hair sheep which don’t require shearing. Originally, the woolshed was going to be the Hub of the Festival, a central place for information, ice, kitchen facilities, First Aid, children’s stage, and some indoor activities. However, with the rain, the entire festival moved indoors. In addition, the attached covered yards, enabled people to stay dry.

Several activities had to be curtailed, and gumboots were an essential item. An industrial heater blasted inside, warming up any who had ventured outside. The warm and cosy woolshed, with its natural shearers stage was, in the end, perfect for the reduced numbers of festival goers.

Friday night Open Mic night, saw four new amateur performers, including two who had not performed much or at all before. These were supported by a duet of Julian Temple on guitar/vocals and violinist Alex Vaastra. Paul Ubana Jones gave a taste of his main show and local celebrity Craig Smith was a fabulous MC.

In addition, two new performers, who missed Open Mic Night played on the Sunday, and a saxophonist joined Julian Temple band in their final curtain calls.

Many people came specially to hear the Wonky Donkey Man, and the children were all thrilled to receive a free Wonky Donkey CD to take home.

Unfortunately, the team of five superstar comedians were one group that couldn’t get out of Queenstown. But we hope to see some of them back for next year.

The highlight of the festival was the Saturday night concert, which had a warm and welcoming atmosphere. Mākin wowed the crowd, promising that their first album will be out shortly. Craig Smith sang with a refreshingly raw honesty. Paul Ubana Jones came onstage early, as he had to go the long way around the Island to get to his next booking, but he didn’t disappoint and was as well received as he was last year.  That left Julian Temple Band to finish the show and they certainly raised the roof. A space was cleared for dancing, and JTB agreed to do a second set, including singing two rounds of Happy Birthdays to two certain special people who had tried unsuccessfully to keep the date quiet.

Sunday was mostly dry, and the day started with Yoga Nidra. This was followed by a barefoot grounding outdoors, making some gumboot-less folk wonder why they hadn’t ditched the shoes earlier. Before heading back indoors, the weather held dry long enough for a farm walk and talk to learn more about the organic farming methods at Mangapiri Downs. The day finished “délice crémeux” with a Cacao Ceremony, specially hosted by Ilenie Shaw of Invercargill.