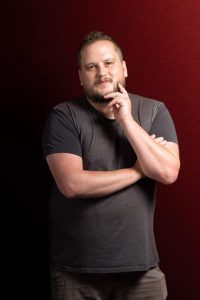 One of the rising stars of the New Zealand comedy circuit, Jamie Patterson is well known for his

Jamie has a unique style that stretches his observations far beyond their logical extreme. Ever since appearing in the grand finals of the Raw Comedy competition a few years ago, Jamie has rapidly grown into one of the most exciting acts to come out of New Zealand.